The Sabbath Was Abolished By Jesus Christ 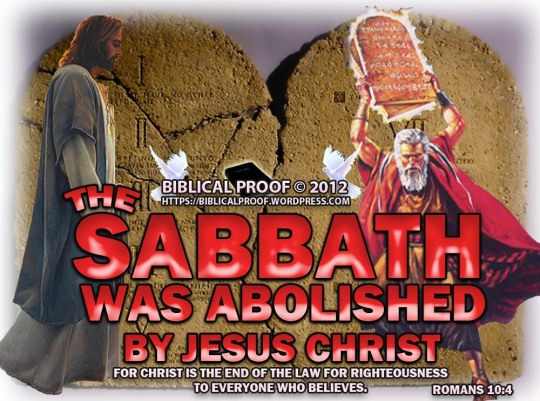 Moses’ Law (10 Commandments Included) Has Been Done Away In Christ

The 10 Commandments were written and engraved on stones. Ex 32:15,16 The new covenant of Christ, on the other hand, was “written not with ink, but with the Spirit of the living God; not in tables of stone, but in tables that are hearts of flesh” 2 Cor. 3:3 Furthermore, what was written on stone (the 10 Commandments), was a killing law, i.e., led to death because of human disobedience, while the new covenant of the Spirit is a life-giving ministration 2 Cor. 3:7 In that same context, Paul says that this old covenant has passed away; it has been replaced by that which possesses a greater and superior glory 2 Cor.3:11 The law of Moses has been abolished: “. . . having abolished in the flesh the enmity, even the law of commandments contained in ordinances; that he might create in himself of the two one new man, so making peace Eph. 2:15 Christ, through his cross, “blotted out the bond written in ordinances” of the old law:” “Having blotted out the bond written in ordinances that was against us, which was contrary to us: and he has taken it out of the way, nailing it to the cross” Col. 2:14 The Sabbath law, along with the rest of Moses’ law, was taken away by the cross of Jesus.

The Sabbath Law Was Given To Hebrews Only

The Sabbath was given to the Hebrews to help them remember their own experience in Egypt: “And you shall remember that you were a servant in the land of Egypt, and Jehovah thy God brought you out from there by a mighty hand, and by an outstretched arm: therefore Jehovah your God commanded you to keep the Sabbath day” Deut. 5:15 It was a unique sign between God and the children of Israel: “Wherefore the children of Israel shall keep the Sabbath, to observe the Sabbath through-out their generations, for a perpetual covenant. It is a sign between me and the children of Israel for ever: for in six days Jehovah made heaven and earth, and on the seventh day he rested, and was refreshed” Exod. 31:16-17 The Jews were to remember the Passover on the Sabbath, even as Christian are to remember the Lord’s death on Sunday. The Sabbath was never for Gentiles, nor was it ever practiced by the church.

The Sabbath law was first mentioned when God fed Israel with manna from heaven, and was formally given by Moses to Israel at Sinai. Nehemiah states: Ex 16 “You came down also upon mount Sinai, and spoke with them from heaven, and gave them right ordinances and true laws, good statutes and commandments, and made known unto them thy holy Sabbath, and commanded them commandments, and statutes, and a law, by Moses your servant” Neh. 9:13-14 Moses, who revealed the Sabbath to the people at Sinai, explained its having been “hallowed” by God in his narrative about the creation in Genesis 2:1-3. However, is noteworthy that none of the patriarchs (Abraham, Isaac, Jacob, etc.) ever observed the Sabbath. It is because God never established it with them, but rather with Israel after they escaped Egypt, crossed the Red Sea, and entered into the wilderness. Moses wrote, “The Lord made not this covenant with our fathers, but with us, even us, who are all of us here alive this day.” Deut 5:3

Paul warned Christians not to be entangled again in a yoke of bondage Gal. 5:1, but to continue in the freedom from the law of Moses which Jesus had wrought upon the cross. Since circumcision was the main issue in Galatians, other facts are often ignored, such as his condemnation of observance of the Jewish holy days: “You observe days, and months, and seasons, and years. I am afraid of you, lest by any means I have bestowed labor upon you in vain” Gal. 4:10-11 The Sabbath was one of those Jewish holy days to which he makes reference. Paul feared that, just as these Gentiles had once been servants of idolatrous gods, they would now serve the false apostles who had invaded their number, make themselves subservient to the entire law, and ultimately sever themselves from Christ and his grace.

Christians Are Not To Be Judged By Jewish Laws

Paul stated it clearly when he said, “Let no man therefore judge you in meat, or in drink, or in respect of a feast day or a new moon or a Sabbath day: which are a shadow of the things to come; but the body is Christ’s” Col. 2:16-17 If we are judged by Christ according to his gospel, and we shall be come the judgment, then it is conclusive that the Sabbath is not a part of the gospel of Christ. Rom 2:16 If any preaches any other gospel, they shall be accursed. Gal 1:6-9 Anyone who justifies themselves by the law of Moses have fallen from grace. Gal 5:4

Christians Are To Worship On Sunday

This was the day of our Lord’s resurrection John 20:1 It was the day upon which early Christians assembled to worship and commemorate the Lord’s death and resurrection Acts 20:7 On this same day they gave of their means 1 Cor. 16:1-2. In the Old Testament, the Sabbath was a day of holy convocation and assembly Lev. 23:3  New Testament Christians were never seen observing this day or meeting in such convocations, except to teach and convert Jews in the Synagogue to Christianity. Christians worshiped on Sunday, since Sabbath celebration ended for them with the Lord’s death on the cross. Sunday was the day we remember the Lord’s death, and the great sacrifice that he gave for us that we might have eternal life.1 Cor 11:24-26

Be Sure, Our Sins Will Find Us Out

The Church Christ Died For Has Only One Name, One Doctrine, One Head

Comments on: "The Sabbath Was Abolished By Jesus Christ" (19)